By Scott Scanlon - The Buffalo News 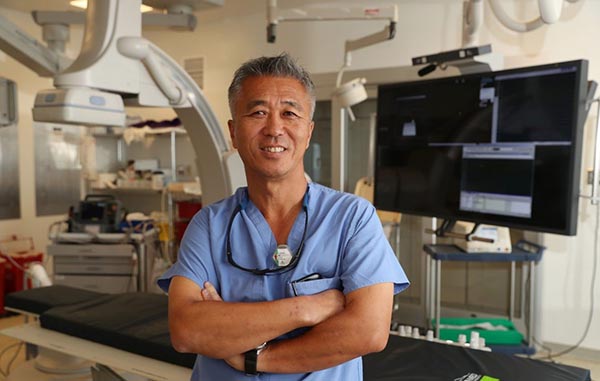 “I tell my patients, 'We have plumbers and we have electricians. I'm an electrician,' Chee said. “I deal with the electrical abnormalities of the heart.”

Sometimes, Kim needs to implant a pacemaker to keep the cardiac electrical system running properly. Other times, he needs to eliminate the cause of the electrical disruption in intricate procedures called ablations.

Sometimes, he never gets the chance to do either. A-fib contributes to an estimated 130,000 deaths nationally each year, according to the federal Centers for Disease Control and Prevention, helping to make heart disease the top cause of death.

“Preventative medicine is where we're going to have the biggest impact,” Kim said, but only if people head the warning signs of trouble. In the case of A-fib, those can include weakness, fatigue, light-headedness, dizziness, confusion and chest pain.

Kim, 56, a native of Seoul, South Korea, is a graduate of Case Western Reserve University Medical School in Cleveland, the city where his family moved when he was 8 years old. He did his advanced training at the University of Rochester. He came to Buffalo in 2004 and was among those who helped plan both the Jacobs School of Medicine and Biomedical Sciences and Gates Vascular Institute, where he works.

He and wife, Jung, who holds a doctorate in immunology, have two daughters, Jackie, 23, a first-year student in the UB School of Dental Medicine, and Alexis, 19, a sophomore economics major at Northwestern University. 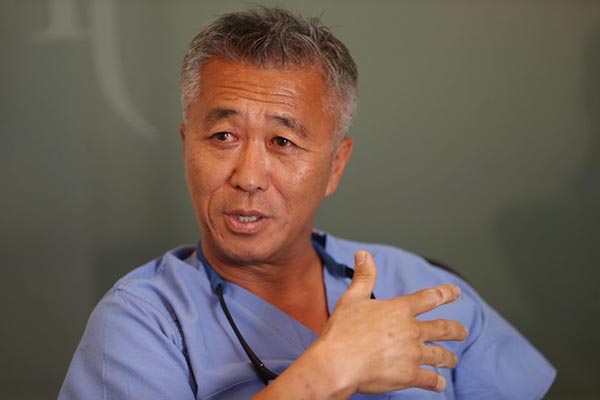 Q: What is atrial fibrillation and how does it arise?

Treatments for atrial fibrillation and other electrical disturbances in the heart have advanced in recent years, says Dr. Chee Kim, a cardiologist and director of electrophysiology innovation and clinical integration at Kaleida Health. (Sharon Cantillon/Buffalo News)

Q: What are the risk factors?The electrical impulses go haywire in the upper chamber of the heart. Not all those impulses make it to the lower chamber but enough get through so that your main pumping chamber beats erratically. Some people know the instant they go into atrial fibrillation. They describe a fish or a butterfly in their chest flapping around. They feel every heartbeat. Other people are completely unaware of it. They go to their doctor for a routine physical, their doctor listens to their heart and says, "Your heartbeat is fast and it's irregular, let's get an EKG."

Smoking, being overweight, having high blood pressure, other heart problems, thyroid abnormalities or sleep apnea. Sleep apnea is much more prevalent than we ever imagined. … It puts a tremendous amount of stress on your body and on your heart. Alcohol is another big risk factor.

Q: Once the electrical impulses start to become problematic, how long can they stay that way?

Atrial fibrillation leading to sudden death is not all that common, however it will lead to congestive heart failure, which then can predispose you to other heart problems.

Q: What surgical procedures do you perform?

Device implants, pacemakers, defibrillators, but most of what I do is catheter-based. It's putting in catheters through the veins to the heart, looking at the electrical wiring in the heart and fixing the short circuits.

Q: How long does a pacemaker last?

The batteries now can last up to 10 years.

Q: How common is A-fib compared to other heart conditions.?

About 2.5 million people in the U.S. have A-fib. The prevalence increases as you get older. By the time you're 80 years old, 10 percent of the population will have A-fib.

Q: What does it do once you have it? Is this a progressive disease, especially if it's not treated?

Initially, it will be intermittent, so you'll have episodes that may last an hour and then your heart will correct itself. You may get it once a year. As time goes on, irregularities will become more frequent and more prolonged …

We may try medications to prevent the atrial fibrillation from occurring. Medications are effective 50 to 60 percent of the time. If that doesn't work, we do an invasive procedure, called ablation, where we go into the left side of the heart and eliminate the electrical abnormalities. It's mostly in the left upper chamber of the heart, where we either cauterize – burn or freeze – them. We generally quote a success rate of about 80 percent with cryoablation in fixing patients' atrial fibrillation, so they don't ever have it again.

It used to be 70-, 80-year-olds. Now I'm also seeing patients in their 40s, 50s, some even in their 20s with atrial fibrillation. I'm seeing a lot of my 40- and 50-year-old patients coming in mostly because of undiagnosed sleep apnea, and alcohol – or "Holiday Heart." People go on a weekend and binge, they're hung over the next morning, and all of a sudden feel their heart racing. It's most likely because of atrial fibrillation. Many times, it will resolve within an hour or two. But that's acute alcohol poisoning of the heart. If it starts to happen more often, that's a problem.

Q: Can you talk about some of the newer procedures you perform?

If we can't control the A-fib with ablations or anti-arrhythmic medications, sometimes we put pacemakers in and cauterize the normal wiring, which prevents the heart from racing, and the pacemaker takes over. That's probably less than 10 percent of the time.

Also, when a patient has A-fib, they run the risk of stroke. If they're at moderate to high risk, we put them on blood thinners to provide blood clots from forming inside their heart. But some patients cannot tolerate the blood thinners because they may be prone to bleeding ... so there's a relatively new intervention for those patients. It's called the Watchman Device. It's like an umbrella device we put in the heart to prevent blood clots from migrating from the heart to the brain. It's been available about three years now. We've done 100 procedures. We go into the groin, through the blood vessels and into the heart to a specific area and deploy this filter, the umbrella. It comes loaded on a catheter and, as we pull the catheter back, the umbrella opens.

There’s another novel device. Say someone comes in with a stroke and we can't figure out why. Twenty-five percent of all strokes may be related to atrial fibrillation and the A-fib may be undiagnosed in those patients. We inject a little chip, the size of a paperclip, underneath the skin over the heart. It constantly monitors your heartbeat. The battery lasts about three years. While you're at home, we'll get recordings of your heartbeat from a bedside monitor that communicates wirelessly with the chip. It'll download information every time you're in bed, so if you ever develop atrial fibrillation, we'll know it like that (snaps his fingers). It's called the Implantable Loop Recorder.

If you have any questions about our practice or services, please contact us to speak with a knowledgeable representative.